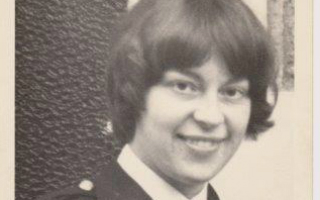 PC Violet Symes was helped by the Police Federation

Violet Symes was serving as a police officer with Bournemouth Police when a botched operation in 1967 left her with a drop foot. The Police Federation of England and Wales stepped in to take up a case against the hospital.

“I was sent to an orthopaedic hospital in London to try to help my foot, but I still had a foot drop. The Police Federation opened a case against the hospital and in due course, I received £4,000 compensation for pain and suffering. They supported me so very well – they even offered to arrange for me to recuperate at a police convalescent home.  I refused the offer, which was silly, as they really did have my best interest at heart.

“The compensation (which I received six years later) for pain and suffering, enabled me to repay my mother the money she had previously lent me to buy my house. Also, there was some left for me. The Federation were responsible for that.

“I only did eight years in the police, but kept friends with many of my colleagues through the years. For some years now I have done welfare visits for the Bournemouth Branch of National Association of Retired Police Officers. I gain much pleasure from the visits and at 85 years of age, I am lucky to be able to do so”.