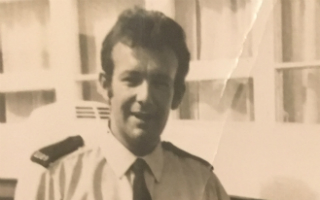 Stuart Cadmore joined Plymouth City Police in 1960, before it became part of Devon and Cornwall Police. During his time as an officer Stuart was involved with both the local and national federation, finishing his career as General Secretary of the Constables’ Central Committee in 1994. Here he shares how he took a stand against poor wages and working conditions throughout his career.

“The busiest era of my federation was in the 70s when poor pay, bad shifts and lack of care for police officers internally was at its height. At that time officers’ kids were entitled to free milk at school, because their parents were low paid workers. On top of the low pay, the Chief Constable was trying to change shift patterns to more weekend working. I wanted to take action, so we did a number of things to draw attention to our cause.

“With no social media, no email and no mobile phones it was difficult to get a concerted action, but we did. I organised letters to be written by 200 wives of police officers in the city, talking about how the weekend shift changes would affect their families. These were all collected, stamped and addressed to the Chief Constable, having all been written from a draft copy. They were all handed to me and then all posted on the same day to the Chief - at which he blew his top. We had a federation meeting with him soon after and he wasn’t very happy at all. We put posters up across Plymouth too, simply saying “CRAP” then explaining that stood for ‘Campaign to Return to Active Policing’.

“We also took action by not reporting as many ‘minor’ offenders as we normally did, to the extent that the number of magistrates courts in use on a daily basis went down from four to one. At one point the Assistant Chief Constable called me in and asked me to get the blokes back working!

“Around the time of the Lord Edmund Davies inquiry into policing some of us including myself, went on Panorama to discuss the Government rejecting his findings. There was a call for us to go on strike and amend the law to allow us to do it. I was on the programme and to millions of viewers when asked if I would strike over the low pay – I said I would.

“During the 70s there was also the famous annual joint conference of 1977, when the Home Secretary Merlyn Rees received the silent treatment to his speech. This had been debated prior to his attending; either all walk out or all keep silent. I supported the walk out but the silent treatment won. I told conference that my board would walk out if there was any noise at all. At one point in his speech he made a comment and there was some derision from the floor. At that point my board got up and left the conference – followed by a couple more boards – but the silence did win the day and destroyed Merlyn Rees really. It was the first time a politician had been subjected to this and was very effective.

“I am convinced that this type of action, which was replicated to a certain extent elsewhere, helped the Police Federation at that time in negotiations to reach improved standards.”