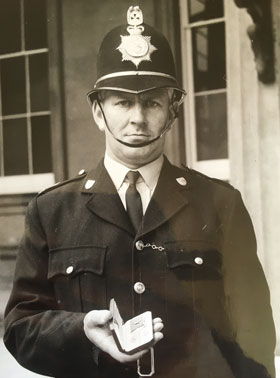 PC John Parkins BEM of Mid-Anglia Constabulary (now part of Cambridgeshire Constabulary) was viciously attacked by car thieves in 1968, in an assault that changed his life. His wife, June, shares below how John came to be awarded a British Empire Medal (BEM) from the Queen for his bravery.

"John had been a PC for a few years and rode one of the police motorbikes. There was one day when police received information that a stolen car was in the area and had failed to stop for two traffic officers. John and a colleague PC Creek pursued the car, with John pulling in front of it to get it to stop, but the driver instead tried to knock him off his bike. The car accelerated and hit the rear of John’s motorbike, causing his back wheel to lock and he was pushed a short distance along the road.

"At this point I refer to the general order, written by Chief Constable of the day, F Drayton Porter:

The car then pursued the motorcycle to the offside of the road where the officer fell from his machine; even at this stage the car still continued pursuing the motorcycle along the road. Eventually the car stopped and the driver jumped from it and ran off across the fields. PC Parkins ran to the passenger side of the car and as he did so, a man jumped out of the car with a shotgun in his hands. As the officer closed with him, the man swung the gun at him, hitting PC Parkins on the side of the head and partly knocking him over.

By that time, PC Creek had arrived and in the struggle with this officer the gun fell to the ground. Despite having been knocked from his machine and felled by a blow to the head, PC Parkins joined PC Creek in arresting the man, who was violent with both officers and had to be handcuffed. 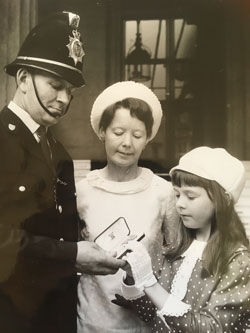 PC Parkins BEM with his wife and daughter

Unfortunately, PC Parkins received head injuries. I am sure that all members of the Force congratulate PC Parkins om obtaining recognition from Her Majesty, his gallant action has not only bought distinction to himself and Mid-Anglia Constabulary, but to the whole Police Service.

"John sustained a serious head injury during the assault. We were living in a police house at the time and our next-door neighbour was a Federation rep. He suggested that we should try to get some compensation, as John’s injuries had been so bad. He did it all for us and the Police Federation was very supportive. John was given £1,000 as a gesture towards compensation, which did help. It was a lot of money back then. John was off work for three months and returned to work on light duties but continued to suffer from the injuries he sustained until the end of his life.

"John, myself and our daughter went to Buckingham Palace on 6 July 1969, where he was given his BEM for gallantry from the Queen. He was about the 25th person she had seen that day, yet she knew everything about the incident and we were amazed by how she made him feel as though he was the only person she was awarding a medal to.

"John did complete his 25 years’ service but was never quite the same after the attack."